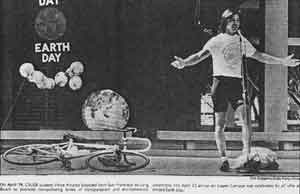 I was scared.  That’s how I felt when I arrived at the Golden Gate Bridge.  Not because I was facing a 500-mile bicycle trek back to Long Beach, but because of the earthquake when I arrived.  I’ve never been fond of earthquakes but I had a passion for riding long distances.

Up until this time I had ridden for fun and to give me something to brag about.  I would always challenge myself to see how far I could ride, taking several trips monthly from Orange County to San Diego, a 100-mile bike ride along the coast.

My cousin Victor challenged me to ride for something other than myself.  He observed how much time and energy I  devoted to cycling and how much attention I got from it.  He felt others could benefit from this.

Air Quality was important to me so I decided to ride for the environment and specifically to clean up the air.  At that time cycling in Orange County and Los Angeles was challenging because of the poor air quality.

Being a student at Long Beach State University (CSULB), I approached my professor, Teny Topalian, with an idea.  She was active in environmental affairs and founded the CSULB environmental non-profit organization called G.L.O.B.E.

“I want to cycle from San Francisco to Long Beach to promote non-polluting forms of transportation and bring awareness and assistance to G.L.O.B.E,” I said.   Her jaw dropped as she gave me a blank stare.  “ San Francisco to Long Beach on a bicycle, are you nuts?” she shouted.  Teny was one of those very vocal and passionate professors.   It didn’t take long however to convince her and gain full support from G.L.O.B.E.

It would also be the 20th anniversary of Earth Day and the first time it was being celebrated in the U.S.  CSULB was having an Earth Day fair celebration and Teny arranged it so I would end the ride at the fair and give a speech about my journey.

I already had many hours in the saddle so training for this event was not difficult.  I was a full time student with a full time job but managed to cycle 2-3 hours a day during the week and 4-5 hours each day on the weekend.  The ride was only a few months away.

Because of the earthquake when I arrived, I decided to leave that night, April 18, 1990, and ride 50 miles in the dark to San Jose.  My parents were kind enough to provide support along the way, meeting me every 20-30 miles up the road.

Finally the morning was here, April 19.  I was eager to get rolling.  I ate some breakfast, pumped up my tires, and filled my pockets with bananas and sandwiches (I don’t think Gu was invented yet).

It rained all the way through Gilroy and Hollister making the windy roads leading southwest to the 5 freeway challenging.  I could tell my parents were nervous.  But when I finally made it to the San Joaquin valley, I found sunshine and a strong wind at my back.

With an ear to ear grin, I was singing natures praises as I easily sailed south for another 100 miles totaling 175 for the day.

April 21 proved to be my most challenging.  I was heading for a 12-mile climb over the Grapevine.  This would be my first experience climbing over a mountain pass.  It was tough.  It was hot.  But when I made it to the top I yelled at the top of my lungs-“yes, I made it”.  That gave me the confidence I needed to finish this ride.

I continued down the mountain and exited the freeway near Magic Mountain.  I rode into San Fernando Valley where I was met with a lot of traffic.  I passed Burbank Studios and rode into Alameda where I stayed the night.  There was nothing stopping me now.

It’s Earth Day.  During the last 12 miles of my trek to the CSULB Earth Day fair, friends cycled alongside.  Teny eagerly greeted me when I arrived and she quickly got me on stage to talk about my journey.  Excited to have completed my journey, I shared the reasons why I did the ride and talked a bit about the ride itself.  I encouraged others to see the ride as motivation and inspiration to do their part for the environment.

Just as planned, the stunt gained a lot of media attention raising environmental awareness and $1,000 in donations for G.L.O.B.E.  I was still able to brag about my bike ride but at least this time it was for a good cause.

Registered Dietitian, Lifestyle Educator, NSCA-Certified Personal Trainer, founder of Athletes for the Quality of Life
View all posts by Vincent Alvarez →
This entry was posted in Helping Our Community. Bookmark the permalink.

One Response to Remembering Earth Day, 1990: A 500-Mile Bike Journey for a Cause